At the dawn of time there was two girls named Kat and Ari who had become BFF when Ari stumbled upon Kat's blog and somehow thought that Kat came from Australia also. Ari had left a couple of comments on Kat's blog, but the more she trawled the archives the more excited she got. She didn't care that it was kind of creepy, she was going to fly over to Western Australia (guys, don't ask. I don't even know why I thought this) and they were going to become bff.

Okay, so the BFF part happened, but unfortunately for Ari she was wayyyyyyyyyyyyy way off. Kat didn't live in Australia at all, so the thoughts of just randomly jumping on a plane were going to have to go on hold for a little while. HOWEVER, the two became quick friends. With similar parenting styles, love of sewing and creating and being a little rebellious and bratty they soon discovered they were also mega nerds. We're not talking "Awww look at the cute little Chewbacca toy, he's so fluffy! I love Star Trek" type nerdy, no we are talking almost hyperventilating and crying when trying to convey a piece of nerdy news love to the other one. We're not elitists, though, you can love a fandom and not be a jerk about it to others who may not know as much as you. We embrace everyone, no matter what level of geekdom (and if you think Chewbacca is from Star Trek that's okay, I still love you).

So long story short, we decided to combine our love of being super dorks into a fun sewing series! We came up with the idea in the middle of 2012, but shortly after Ari was asked to compete in season 6 of Project Run & Play! It was exciting and fun, but Sew Geeky had to be on pause for a little bit. It had its chance to shine though, on one of the geekiest days of the year: May 25 - Geek Pride Day

Our first theme was 8 Bit Babies! A homage to the video games we liked to play as kids as well. Instead of going with the almost go-to Super Mario Brothers route, we went a little different!

And please click through to see Ari's Sonic the Hedgehog and hilarious baby Amy Rose! 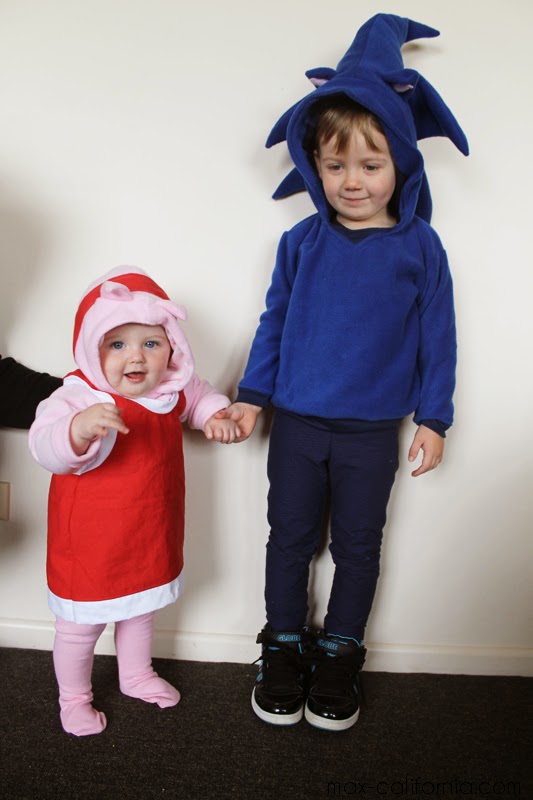 
Check out all the inspiration we have gathered on our Pinterest board: Sew Geeky - Sew Gaming!